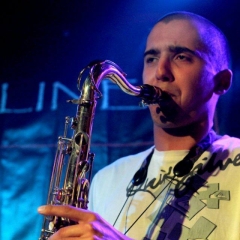 Nikolai has worked with many different bands. He has repeatedly played in places emblematic of Varna club music such as Menthol, Alibi, Cubo, Planet, Palm Beach, Studio 21, Bolla Bar, The Garden bar. He has also played in the Plovdiv club Puzzle, the Sofia clubs Studio 5 (the best jazz music club in Bulgaria), Mixtape 5, Thin Red Line, The box, Maimunarnika. He is a participant in many festivals, the most important of which are Spirit of Burgas 2010, Trinity Farm Fest 2012, Uzana Polyana Fest 2014 and a regular participant in the Varna Funcity Festival for the period 2011-2016.

Ангел Петров Ученик
"Music for Bulgaria" is a public benefit foundation. We are here to support the music scene and everyone who wants to develop their musical potential. Any donation goes for the improvement and expansion of our current music projects and for the realization of new ideas. Thanks to everyone who supports us.
or with bank transfer
Music For Bulgaria Foundation
IBAN: BG44 CECB 9790 10D8 9623 00
BIC: CECBBGSF